Bigger is Not necessarily better

Contact us today if you want to learn more or wish to connect with a soccer magazine publisher.

Caribbean Stars  has evolved from a Soccer Club in the Canadian International Soccer League (CISL) to a reliable Online News and Sports Portal via our website and Stars Soccer Review (SSR) magazine. 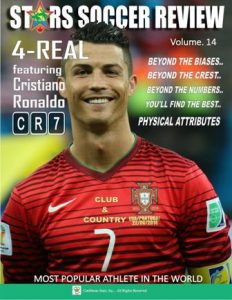 Stars Soccer Review magazine (SSR) is a product of Caribbean Stars Inc, and has been produced to increase diversity, and add to the already established website, www.caribbeanstars.com

Caribbeanstars.com website was launched on May 21, 2005 and SSR Magazine publication in April of 2007.
With 35+ years of soccer information and experience, Caribbean Stars media networks are at the top of their game when delivering football/soccer news and coverage with Stars Soccer Review magazine.

Raised under the British influence, Caribbean Stars has operated at all levels of the game of soccer which is better known as football around the world.

This experience  combine nicely with the knowledge acquired from coverage of the   North and Central America football (CONCACAF) tournaments.

Our early love for Brazilian football, gave us a good appreciation of South American football. Along the way we also acquired a likeness for Germany style of football and their attention to team work. Germany stamp on the world football has been a lesson not just to achieve success in a team sport, but a reminder to self absorbed superstars that the game is much bigger than the contracts they signed. Germany teams are almost a sure bet to be amongst the highest scoring at FIFA Tournaments

Spain’s potent ball possession game has become the admired brand of most players and coaches and seems to have taken over from Brazil’s samba style as the blueprint for football. This shift in balance has given the Asian, African, and other upcoming football nations an opportunity to run under the radar to create surprises and upsets at FIFA tournaments.

The evolution of the tactical side of football/soccer has made the outcome of FIFA tournaments more enjoyable since results of games are less predictable. The beautiful game can present some ugly scenarios and disappointments for unprepared or overconfident teams.

As a subscriber to Stars Soccer Review magazine you will have an opportunity to enjoy world class football from a soccer perspective.

Here at Stars Soccer Review magazine we established that bigger is not necessarily  better, since knowledge is the key. 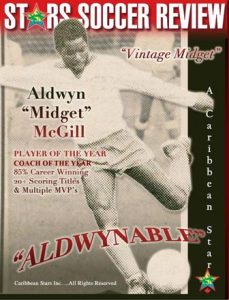 is to continue to deliver the beautiful game from an administrative, coaching, playing and journalistic vantage point. In other words “We’ve got it Covered”

SSR magazine will continue to impress, when reviewing information while taking the journey forward. Of utmost importance is the fact that we are improving with every issue of the magazine since we are aware that we are only as good as our last magazine.

As a result, we are confident that in the end, our unique coverage will make us the # 1 soccer magazine in CONCACAF and eventually the world.

Stay abreast with current affairs via our website, as we set up SSR magazine electronically. SSR magazine is available through our on line store and at outlets near you.

Caribbean Stars” has enjoyed great success over the years and has grown and will continue to grow due to our commitment to provide positive contributions to not only the Caribbean Community, but all communities.

In 1975 West Indians in Toronto wanted to play soccer for more than just fun and exercise, they wanted to compete so a recreational League was created – Street

In the beginning games were played at Oakwood Collegiate, then moved to Bathurst Heights Secondary School and later to Flemingdon Park where the Street Guys League stayed for the following 18 years. One of the aims of the organizers of the SGSL was to bring together people with a common heritage and sporting 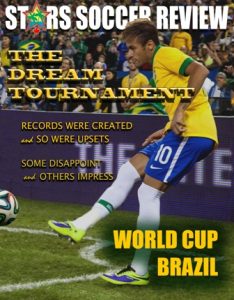 interest, which then turned into rivalries in a friendly and festive atmosphere.

In 1982 the Leagues name was changed by Administrator Aldwyn McGill to Toronto Caribbean Soccer League (T.C.S.L.). The new name created a positive image, recognizable identity and commanded respect within the soccer community and at inter-League All Stars Competitions

With the identity transformation the League felt it was time to make this more than just an activity for the boys, but an opportunity to bring families and the community closer. As a result an Open Knock Out Tournament and Caribbean Inter-League Champion of Champions game was developed to attract outside teams and leagues, and the organizing of a Family Day.

The Sports and Family Day objective was to remove the serious soccer focus for a day and allow teams to showcase their abilities at other activities. It also allowed the children, mothers and non-soccer fathers to socialize while participating in track and obstacle races, fete matches (soccer games with numerous refreshment breaks), while at the same time being entertained by Drummers, Steel Pan, and DJ music.

The future looked bright, so much that the Leagues Caribbean (All) Stars were invited to represent Trinidad & Tobago in a local World Cup Tournament, but alas, it was not to be T.C.S.L. ceased operation in the summer of 1993. 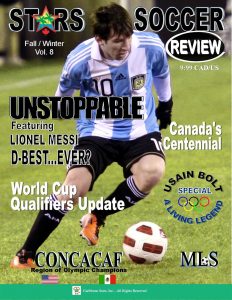 All was not lost though, in 1995 the Caribbean Stars Soccer Club, (C.S.S.C.) was formed by Aldwyn McGill (T.C.S.L.) and Noel Denny (Malvern Friendship League) to play in the Canadian International Soccer League (C.I.S.L.) better known as the Puma League. They were able to attract an elite group of players as a result and in their inaugural season the Club played the opening exhibition games for the Caribana Cup International Tournament.

The Caribana Cup comprised of the national men soccer teams from Trinidad & Tobago, Jamaica and Canada.

Caribbean Stars later withdrew from the then merged C.I.S.L. and Canadian National Soccer League and as a result began traveling locally and internationally.

C.S.C.P. is a promotional team, which helps organizations and individuals promote and advertise special events.

The group was partially responsible for promoting the international soccer game between Portmore United (Jamaica) and Metro Lions (Toronto) in September 2004. The game was played before a close to sold out crowd with proceeds given to the Jamaican Consulate to assist in the Hurricane Ivan Relief Fund.

Caribbean Stars was one of the top teams in the CISL but it had no help from the business community and without a legitimate soccer news media in the community Aldwyn saw an avenue where he could used his expertise and experience in soccer to promote the sport via a magazine publication.

He learned that having the right personal in relation to operational efficiency is what makes an organizations successful and sort the advice of family members like his sister Yvonne and brother Victor in concert with  close friends such as Dixon Modeste, Ken Mollineau and Saliym Val Sebro about his intentions for a publication 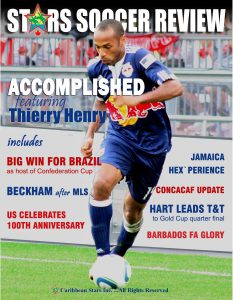 Aldwyn registered Caribbean Stars Inc. as a result of their positive feedback and the caribbeanstars website was launched in 2005 after he took a retirement package from Bell Canada in December 2004.

“I knew very early that we do not have control over longevity but that we still had to plan for the things we wanted to accomplish in life. Watching how things unfolded, I can honestly say that being associated with Caribbean Stars has been one of the most gratifying decision and experience of my football/soccer career

“Besides my playing successes and good health God had presented me with the opportunity to be part of the Trinidad and Tobago media team for the 2006 World Cup in Germany. I was already a freelance journalist, with the Caribbean Camera Newspaper in Toronto and covered the Soca Warriors playoff series against Bahrain for the community in Toronto.

It was an exciting moment in my career and somewhat of an unbelievable experience when you take into account that I was selected to the Trinidad squad to undergo training for the 1974 FIFA World Cup in Germany before I migrated to Canada in ’72 and eventually got the opportunity to watch a world cup while covering Trinidad and Tobago Soca Warriors at the country’s first ever world cup appearance”.

Stars Soccer Review Magazine volume one was created from the highlights of the FIFA World Cup in Germany and the anticipation of Toronto FC playing its inaugural MLS season that was coinciding with David Beckham arrival in the MLS after signing with LA Galaxy. 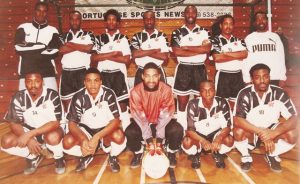 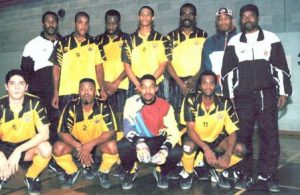 Caribbean Stars has evolved into a Sports and Cultural Club which host tournaments, promote International games, and organizes its Annual Sports and Family Day.

For over two decades Caribbean Stars have been the ambassador and positive influence in the Caribbean Community.  The club has nurtured and developed, model citizens, elite players, winning teams, competitive leagues, memorable tournaments, enjoyable social events, and lasting friendships.

Caribbean Stars has also formed professional relationships with individuals, clubs, and organization both locally and abroad.

We ask that you continue to support the Caribbean Stars Experience.